What did early Irish harpers play and sing?

An overview of historical repertory

Though there is no direct evidence for the accompaniment of plainchant by early Irish harps, there are accounts of harps accompanying sacred music. The early-fifteenth-century Great Book of Lecan mentions a ninth-century Irish abbot singing to an ochttédaich or ‘eight-stringed’ instrument.[1] Irish iconography of the eighth- to twelfth centuries shows stringed instruments in religious and biblical contexts, possibly played by professional musicians, clerics or, ubiquitously, King David. By the twelfth century, Gerald of Wales remarked:

…Wherefore [music] stirs courage in the bold and moves holy intentions in the pious. Hence it is that bishops, abbots and holy men in Ireland carry citharas about[2] and have grown accustomed to play on them, delighting in a holy manner.[3]

Accounts­ from eighteenth-century Ireland indicate that harpers of that – and the preceding – century, composed and performed instrumental music for liturgical use. The mid-eighteenth century History of Kerry mentions the seventeenth-century harper, Nioclás Dall Pierce’s ‘…singular capacity of composing Lamentations funeral additions and Elevations…’[4] Another eighteenth-century poem that mentions Nioclás Dall also mentions the harp in church in the context of orgáin, cláirseach is sailm [‘organ, harp and psalms’].[5] The eighteenth-century harper, Thady Elliott, ‘usually accompanied the service [Mass] on his harp…’[6] as did the most famous harper of that century, Turlough Carolan, who ‘frequently assisted with his voice and his harp at the elevation of the Host; and has composed several pieces of church-music, which are deemed excellent’.[7]

Carolan’s student, the scholar and antiquarian Charles O’Conor, of the distinguished O’Conor Don family in co. Roscommon, recalled in his memoirs his father, Denis O’Conor, having ‘hired a number of harpers to strike up a solemn concert at Midnight Mass’.[8] O’Conor also wrote to a friend recalling a piece of sacred music performed by Carolan:

On Easter-day I heard him play it at mass. He called the piece GLORIA IN EXCELSIS DEO, and he sung that hymn in Irish verses as he played. At the Lord’s Prayer he stopped; and after the Priest ended it, he sang again, and played a piece, which he denominated the RESURRECTION.[9]

The early Irish harp’s performance practice belonged to the medieval oral traditions of Europe, with no repertory notated until a possible indirect appearance in seventeenth-century Scottish lute MSS.[10] The idiom of the earliest secular music performed on the instrument therefore remains elusive.

Syllabic bardic poetry in Irish, sung to accompaniment, was the apogee of medieval courtly performance art up to the early-modern period.[11] The harper accompanied the singing of praise poems and possibly laments, epic lays, histories and genealogies. That the poetic metres found their counterpart in measured, metrical harp accompaniments may be alluded to in this late description:

…the Poem…was perform’d with a great deal of Ceremony, in a Consort of Vocal and Instrumental Musick. The Poet himself said nothing, but directed and took care, that every body else did his Part right. The Bards having first had the Composition from him, got it well by Heart, and now pronounc’d it orderly, keeping even Pace with a Harp, touch’d upon that Occasion; no other musical instrument being allow’d of for the said Purpose than this alone, as being Masculin, much sweeter, and fuller than any other.[12]

A poem that at least predates 1200 also echoes the concept of a sophisticated rapport between harper and singer, the harp being ar aen [‘at one’] with a clear voice,[13] while singers accompanying themselves on harp can be traced back to the medieval period.

It is still the subject of debate whether the ceòl mór [‘big music’ a.k.a. piobaireachd [‘piping’]] tradition of variation sets in Scottish piping of the seventeenth century onwards, together with a unique source of comparable variation sets in late-medieval Welsh harping,[14] had a parallel in Irish harping, and in vocal-accompaniment practice.

The refrain-and-episodes structure of the didactic composition, Burns’s March, may point to the existence of such a genre in Ireland. The medieval rondeau form of this unique piece – AA BB AA CC AA DD AA etc. – is indicative of an antique origin. Other Irish marches played by harpers were also specific to clans or kings as evidenced by their titles, for example The King of Leix’s March.

Strophic songs associated with harping survive from before 1650 but it is the vocal repertory of the later seventeenth- and eighteenth-century harp composers that has best survived. Harp songs were sung and played simultaneously by a single performer. Most fall into three categories: love songs, praise songs for patrons, and epithalamiums, celebrating marriages. Bawdy, vulgar songs are rare but not unknown.

A genre of harp preludes – the féachain gléis – existed historically. Now only one example remains: the féachain gléis prelude performed in the 1790s by one of the last vernacular harp virtuosos, Dennis O’Hampsay, who explained that the old harpers ‘were accustomed to play the ancient caoinans or lamentations, with their corresponding preludes’.[15] One English-language title for the surviving example is Try if it is in tune, and Seán Donnelly has translated the Irish title as a ‘preliminary test or tuning trial’. Harp tuning as a performative activity is documented already in medieval British, and continental European, practice. Ann Heymann has situated the surviving féachain gléis as compositionally parallel with the earliest surviving European keyboard preludes from the mid-fifteenth century.[16]

Ireland’s first systematic music collector, Edward Bunting, wrote that the caoine [‘lament’] ‘was a solemn piece of music, intended as a tribute of respect to the deceased, and was looked on as the greatest test of the abilities of the harper. It consisted of three divisions in one lesson, and was not intended to be sung.’[17] Irish harps were involved in caoines for dead patrons from at least the sixteenth century but probably much earlier. Later in the vernacular harping tradition, laments were sung to harp accompaniment, with eighteenth-century examples by Turlough Carolan (1670–1738) still surviving.

The earliest examples of the instrumental genre connected with harping known as the port are found in seventeenth-century Scottish MSS for lute and other fretted, plucked instruments.[18] Further examples survive in the Bunting MS collection, and in an early nineteenth-century collection from the Isle of Mull in Scotland, the latter captured indirectly from the eighteenth-century Irish harper, Echlin Ó Catháin.[19]

Outside influences on Irish harp repertory

Chivalric French influence on Irish poetry is well documented: the lyrics of the Irish love-song tradition were influenced by amour courtois [20] so it is not surprising to see the existence of the medieval French rondeau form that I have identified in Burns’s March. Similarly, Irish harp repertory includes examples of the European Nachtanz [‘after-dance’]: a faster triple-metre dance that uses related thematic material from a previous, related slower composition. Jigs follow seventeenth-century compositions such as Port 7th in the Maclean-Clephane MSS, The Jointure by Thomas Connellon (c. 1649–ante 1700) and eighteenth-century Carolan praise songs such as Mrs. Bermingham, Lady Dillon and Michael O’Connor. Joan Rimmer has argued for further evidence of early European dance forms in the work of Carolan, including estampies and bransles.[21]

Sixteenth- and seventeenth-century harpers working within European art-music environments – for colonial patrons in Ireland or at English or Welsh aristocratic establishments – would have been involved in the performance of contemporaneous European music. King James I of England’s royal harper, the Irishman Cormac MacDermott, composed European Renaissance courtly dances: pavans and almains.[22] Successive players of Irish harp at the English royal court performed in the royal entertainments known as masques, and probably performed one, or more, voices in consort music, alongside other instruments. They may also have provided accompaniments improvised over a bass line in instrumental and vocal pieces. They would also likely have played ground basses (repeating bass patterns) and divisions (a kind of variation).[23] The Irish harp was also known in continental Europe at this period, reaching as far south as Florence by 1581, enabling the musician and music theoretician, Vincenzio Galilei – father of the astronomer – to describe an Irish harp.[24] It also travelled as far east as Poland, and by the early seventeenth century was played at German and Danish courts.[25]

A cadre of harpers who had once had royal patrons at Gaelic courts in the medieval period, and who were welcomed at English and continental courts in the seventeenth century, become travelling musicians by the eighteenth century. They were welcomed at the great Irish houses by descendants of Old English (Norman) and New English (Tudor) patrons alike, in addition to their traditional, Gaelic sponsors.

Italianate music became increasingly familiar in Ireland from the early eighteenth century, and was fashionable in the milieu in which the harpers and their aristocratic colonial patrons moved. Italian divas and instrumentalists performed in Dublin – the second city of the British empire – in addition to London, when they went on tour to Britain. The composer and conductor, Johann Sigismund Kusser [Cousser] (1660–1727), moved to Dublin by 1707 and later became ‘Master of Musick attending his Majesty’s State in Ireland’. He had studied with the famous Jean-Baptiste Lully, in France, for six years in the 1670s, but was equally adept at Italian style and brought his expertise in both French and Italian music to Ireland.[26] Kusser’s death in 1727 created a vacancy that the influential Italian composer, and student of Corelli, Francesco Geminiani (1687-1762) was invited to fill but it was his student, Matthew Dubourg (1703-1767), who finally took up the position. Nonetheless, Geminiani spent a great deal of time in Ireland, from his first visit in 1733, until his eventual death in Dublin in 1762.[27] Dubourg was an English violin prodigy, musical director and composer who moved back and forth, professionally, between Dublin and London until 1765, after which he lived in London until his death two years later. He was a colleague and close friend of Handel, leading the latter’s orchestra for his Dublin premieres in 1741-2 including the world premiere of Messiah. [28]

This was the urban colonial-music context in which Irish harpers found themselves, and one which influenced domestic music-making in the great Irish houses, where they were received as guests or where they were employed more consistently. Some were known for adapting Italianate repertory including arias from Handel’s oratorios (Dominic Mungan, c. 1715 to 1770s),[29] and adagio movements from works by Geminiani and Corelli (Mungan and Echlin Ó Catháin).[30]

Some Irish harpers in turn travelled to London as well as to Dublin from the homes of their aristocratic employers in the provinces; for example, Cornelius Lyons (c. 1680–post 1750). These were clearly heavily influenced not only by what they heard in these cities but undoubtedly also by domestic music-making in the homes of their colonial patrons. The continental influence is particularly noticeable in the much remarked-upon Italianate flavour of some of Turlough Carolan’s output. The influence is also to be seen in the division-writing to be seen in compositions collected from late-eighteenth-century harpers such as Hugh Higgins.[31] Of particular note, in this regard, are divisions surviving in the two surviving variation sets of Cornelius Lyons.

Though traces of the vernacular harping tradition were still faintly discernible throughout the nineteenth century, the tradition was effectively dead shortly after 1800.[32] 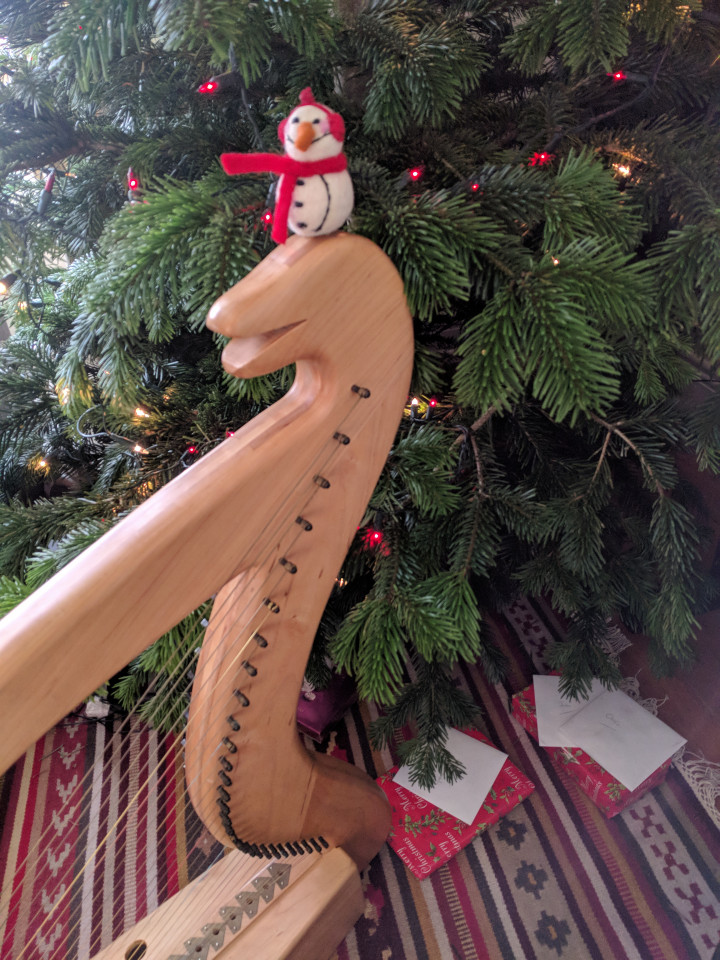 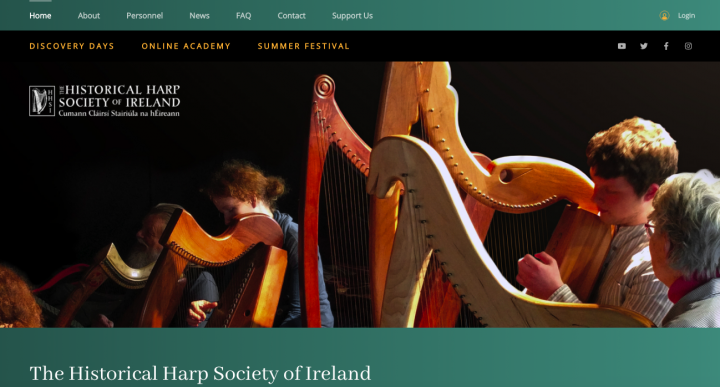 Have a look around!