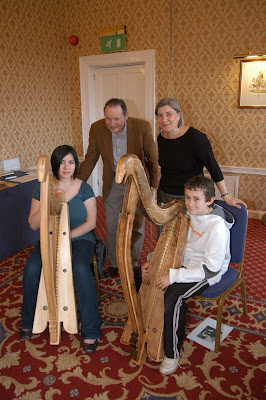 O’Hampsey was the last Irish harper to play the harp in the medieval way using his fingernails to strike the strings. He had an old-fashioned style and repertory even by 18th century standards, considering Carolan’s music rather ‘modern’. He was from Co. Derry and toured Ireland and Scotland in his lifetime. In 1745 he was in Edinburgh, where he played before Bonnie Prince Charlie.

The old Irish harp tradition, to which he belonged, was the ancient, high status music of the Gaelic kings and chiefs. O’Hampsey’s harp was an early Irish harp: the kind of aristocratic, medieval instrument–strung in brass, sometimes also silver and perhaps even gold wire–of the kind which was played in Ireland and the Scottish Highlands from the early Middle Ages until it died out around 1800. This is the instrument depicted in the national emblem of Ireland. The now much more familiar gut or nylon-strung neo-Irish harp, invented in the 1820s, bears no relation to the courtly original.

However, the disappearance of the early Irish harp was not entirely without trace. Some of the old repertoire has come down to us thanks to the work of Edward Bunting, the young man who sat beside O’Hampsey in the 1790s, scribbling down the tunes and settings as fast as he could into his pocket notebook. Thankfully, this is preserved in the library of Queens University Belfast. O’Hampsey’s instrument–the Downhill harp–also still exists and is on display in the Guinness Storehouse museum in Dublin.

The bicentennial celebrations in Limavady began with two beginners’ workshops given by Siobhan Armstrong, Chair of the Historical Harp Society of Ireland. Sixteen participants had a chance to play replicas of surviving historic Irish harps supplied by the HHSI, including copies of O’Hampsey’s Downhill harp from 1703.

Later in the day, Siobhan gave a talk about Dennis O’Hampsey and his importance in the early Irish harp tradition. This was followed by an evening concert given by members of the nearby Hampsey Harp School playing their neo-Irish harps and with Siobhan playing, among other items, some of O’Hampsey’s repertory on early Irish harp.

“I was completely bowled over by the welcome I got and the interest that local people had in the early Irish harp tradition, which once thrived in the area.” said Siobhán Armstrong. “The Limavady and Magilligan area, where Dennis O’Hampsey lived, is not only one of outstanding natural beauty but absolutely steeped in layer upon layer of history from prehistoric times to the early Christian era and on into the Middle Ages and much later. The O’Hampsey Celebration events took place in Roe Valley Park just outside Limavady, home to the ancestral castle of the Ó Catháins, a family that gave us a famous 16th century Irish harper–Ruaidhrí Dall Ó Catháin.

I had the good fortune of having been given a guided car tour of the entire region by the erudite Jim Hunter, the local scholar who has himself published several booklets about the area’s history, including one on O’Hampsey himself.

He was fascinating about diverse subjects: from the geology of the area to the early Christian monastic settlements nearby, to the exploits of the amazingly broad-minded bon viveur bishop
Hervey Bruce, of Downhill, who patronised O’Hampsey. He also recounted some hilarious local stories including one or two concerning US troops billeted in the region in the Second World War.”

Siobhan Armstrong and the Historical Harp Society of Ireland would like to thank Limavady Borough Council for their collaboration in celebrating Dennis O’Hampsey in this his bicentennial year.

For more information about