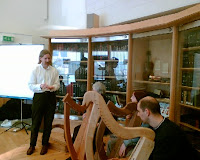 November 2007 was the 200th anniversary of the passing of the most important of all the old Scottish and Irish harp players: Denis O’Hampsey (1695 – 1807), and events were held in Scotland and Ireland to commemorate the anniversary at the beginning of November.

Although the main events were held near O’Hampsey’s home in Co Derry, N. Ireland, HHSI Honorary Secretary Simon Chadwick also organised events on the East coast of Scotland. He led a workshop at the Wighton Heritage Centre, Dundee, on Saturday 10th November, which explored the music of Denis O’Hampsey. Attendees were able to look at music from the Wighton Collection’s old music books, including original editions of Bunting’s collection with a rare engraved portrait of Denis O’Hampsey, and a facsimile of Bunting’s field notebook provided by Queens University Belfast, as well as being able to play on one of the HHSI Student Downhill harps.

On Sunday 11th November Simon played a concert at the St Andrews Museum, in Kinburn Park, St Andrews. The capacity audience – some latecomers had to sit on the floor – listened to a selection of pieces from O’Hampsey’s repertory played on the replica Downhill harp. The recital also featured Simon’s fantastic new replica of the medieval Scottish ‘Queen Mary’ harp.

With thanks to
The Friends of Wighton www.friendsofwighton.com
Fife Council Museums Service www.fife.gov.uk