2009 is the 200th anniversary of the publication of Edward Bunting’s General Collection of The Ancient Music of Ireland. This book, published by Clementi in London in 1809, presented the results of seventeen years of fieldwork, collecting Irish music from the last of the old harpers. As well as the old Irish tunes, the book includes a significant historical dissertation, and engravings of two of the old Irish harpers, Denis O’Hampsey and Arthur O’Neill.

This year’s Scoil na gCláirseach—Summer School of Early Irish Harp, which runs from 15th to 21st August 2009, in Kilkenny, Ireland, will use Bunting’s 1809 collection as its theme.

The class tuitions and workshops at the Scoil will use tunes almost exclusively from the 1809 book, highlighting the diversity of Bunting’s collecting, which included Gaelic songs and ancient traditional tunes as well as the more up-to-date compositions of Carolan and Connellan. Because Bunting made the tunes into Romantic piano arrangements for publication, the versions studied in class will be taken from his original field notebooks which are preserved in Queens University Library, Belfast. The Historical Harp Society of Ireland is very grateful to Queens University Library for providing high quality facsimiles of Bunting MS29 & MS33 for use in class.

The 1809 theme will also extend to the public concert in the Parade Tower of Kilkenny Castle, which will be at 8pm on Wednesday 19th August. As well as early Irish harp music from the collections, performed on replica early Irish harps by Scoil tutors Ann Heymann, Andrew Lawrence-King and Siobhán Armstrong, the concert will feature Romantic 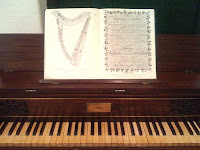 An original 1809 first edition copy of A General Collection of The Ancient Music of Ireland by Edward Bunting, which belongs to the Historical Harp Society of Ireland, will be available to consult in Kilkenny during the week of events. The photo shows the HHSI’s first edition copy, on the music stand of the Clementi piano.

View an online facsimile of Bunting’s first field notebook, from 1792 to 1805:
http://digitalcollections.qub.ac.uk/digital-image-gallery/bunting/
(Note: this website has been unavailable recently)